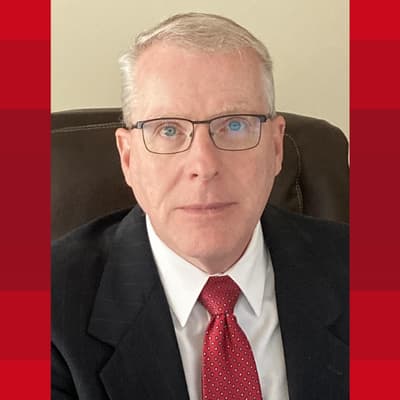 After receiving a Bachelor of Arts degree in Political Science from the University of Pittsburgh at Johnstown, John made his way to law school at the University of Richmond where he achieved a Juris Doctorate in Law. After three years in Richmond, he accepted a commission to serve in the United States Navy JAG Corps before returning to finish his degree and pass the bar exam. During his military service, he spent several years travelling the globe as a naval officer assigned to the USS Grasp and later at the Naval Legal Service Office at the Norfolk Naval Station.

Once his time in the Navy came to a close, John returned to his roots and spent the next 28 years as an assistant United States Attorney in the Western District of Pennsylvania, covering the cities of Pittsburgh and Johnstown. Whilst in this role, he acted as the Chief of the Johnstown Division where he was helped to prosecute countless cyber-related cases involving fraud, narcotics and child exploitation.

John retired from law enforcement in 2018 to pursue a budding interest in cybersecurity. He started attending lectures at the Department of Justice, collecting many qualifications and becoming certified in Ethical Hacking, Mobile Forensics, AccessData, Hacking Forensics and Blockchain Investigations.

Due to his many impressive credentials, John was offered several teaching positions at prestigious universities and industry teaching bodies before deciding to join Saint Francis University in Loretto, Pennsylvania as an associate professor of Cybersecurity. As the University’s Cyber Defense and Forensics Coordinator, he was responsible for the development of their information security programs and spent his time ensuring their curriculum was the most diverse on offer.

In just three short years, John and his team created more than 14 specialised cybersecurity courses covering everything from digital forensics, dark web analysis and open-source intelligence gathering to complex online investigations, blockchain examination and cryptocurrency analysis. His work with the University was even recognised as an authority on the subject by both the National Security Agency and the Department of Homeland Security and was approved as a Designated Program of Study in Digital Forensics.

Since leaving Saint Francis, John has worked as the Director of Training for the Center for International Cyber Intelligence (CI2) whilst also serving on their board of directors. He also lent his services as a guest-lecturer to the Dickinson Law School in Carlisle, Pennsylvania and conducted several multi-day training sessions teaching blockchain and cryptocurrency analysis techniques to agents and analysts from the Drug Enforcement Agency (DEA).