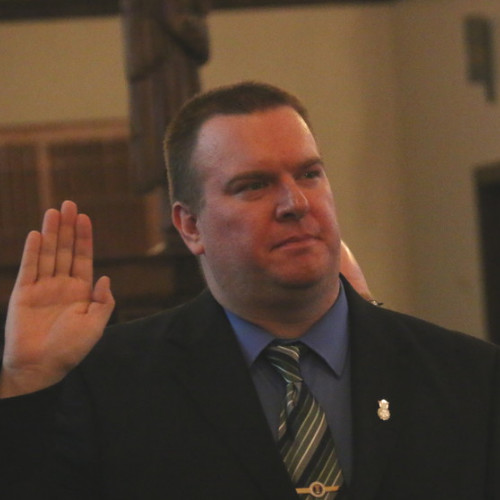 For nearly 30 years, Jonathan has been passionate about law enforcement. As a high school student in New Jersey, he joined the Pitman Police department through their Law Enforcement Explorers Program in 1993 and served as a special class police officer until his graduation. He continued his education at Gloucester County College for their Law Enforcement Associates Program until he was motivated to join the US Air Force by the tragic terrorist attacks of 9/11.

Jonathan served in the military for 3.5 years, working alongside the Japanese in the Misawa Air Base and being deployed to Pakistan for Operations Enduring Freedom and Iraqi Freedom. After suffering a career-changing injury, he was honourably discharged from the military and moved to Central Pennsylvania to work in counter terrorism, where he earned both an Anti-Terrorism Officer certification from the S2 Institute and a Bachelor’s degree in Homeland Security from the American Military University (AMU) in just two years! During his time in Pennsylvania, he acted as a liaison to federal, state and local law enforcement while providing security to the county’s infrastructure.

Shortly after obtaining his degree, Jonathan realised that the field of law enforcement was rapidly changing and made the incredible transition to computer-based investigations. After much trial and error, he went back to school to gain a second bachelor’s degree in Information Technology with a Digital Forensics Concentration from Mount Aloysius College, an ACE Certification through AccessData and a master’s degree in Criminal Justice from AMU. While in school this time, Jonathan was contracted to conduct cyber intelligence and dark web investigations for several government agencies.

After he graduated in 2017, he was hired into the federal government and began working with the Internal Revenue Service (IRS) as a Computer Investigative Forensic Analyst (CIFA) in their Criminal Investigations Division in the Digital Forensics Unit. During his time here, he sped through their Basic and Advanced certification programs and became an accredited Cisco Certified Network Associate (CCNA), AccessData Certified Examiner and an EnCase Certified Examiner, along with various other training and certifications in Data Recovery and Security. He was deeply involved with the development of their computer and cyber forensics techniques and systems before transferring to the Cybercrimes Unit in 2020 as a Cryptocurrency Subject Matter Expert and Fraud Detection Analyst.

On top of his various teaching engagements as an Adjunct Professor at Saint Francis University, Jonathan also served as the Executive Director for the Center of International Cyber Intelligence (CI2) between 2018 and 2021. This non-profit aims to protect life and property on the surface, deep and dark webs by providing and promoting training to cyber investigators and their organisations throughout the world. Jonathan directed over 100+ volunteers in cyber intelligence and open-source investigations for a number of international stakeholders.